How many of your friends are tarot readers, yogis, witches and sexually active humans? Oh, all of them? Great! So is Alessandra Calderin, creator and host of the new show Sex Magic :: A Taboo Busting, Sex Positive, Magic Making Event. On Sunday, January 7th (6 pm), she's assembling a delicious lineup of performers to put on a taboo busting, sex positive and magic making event featuring true stories, confessions, education, burlesque and even a spell or two. We talk to Alessandra about sex, magic, and putting together the show! 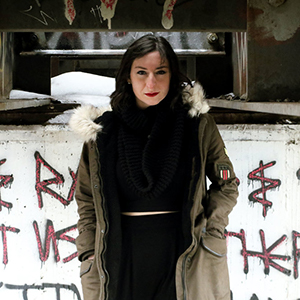 What's the inspiration for your show Sex Magic?

We all love sex, but we seem to have a hard time with it. As a sexually obsessed AND repressed society, there are all these conflicting messages about what's acceptable coming from what feels like a million different directions. I could literally go on for days about how the complexity of all this messes us up, but suffice it to say, it feels very unsexy, unfun and at worst, dangerous.
This manifests itself in every community in its own ways, including ours, whether it's a creepy scene partner, or a fear of ever broaching the subject both on and off stage.
Sex magic itself is the practice of using the energy of sexuality and orgasm to set intentions and manifest desires and goals, and so this show is my manifestation of a free fun and safe space to talk about sex!

How did you assemble the team of amazing performers featured in this show?

I'm very lucky to have amazing friends and fellow performers who say yes to me. It was a lot of texting and Facebook messages just saying “hey do you want to talk about sex on stage with me?” And some folks were just like yeah just tell me what you want me to do. Other folks, like the lovely Chris de la Cruz, had their own amazing ideas to add to the show. So, in short, luck and friendship.

What is Boneseed and how did you create it?

Boneseed is my moniker for the work I do with tarot, yoga and intuitive healing. I quit my corporate job about a year ago and have been building my private practice ever since. Actually, my first public workshop was called Creating Sex Magic and was a yoga and writing workshop that focused on the Sacral Chakra, which is the area around the pelvis where we store our creative and sexual energy. It's kind of my favorite part of the body and sexual exploration and freedom is where I'm really able to offer a lot of ideas and insight since I've studied the pelvic floor and cycled through my own range of issues with regards to both physical and emotional blockages down there.
You can learn more about Boneseed and what I do at www.boneseed.co.

What's the best way to build space for sex positivity in the improv community?

Literally just talking about it in a real way. I feel like sex in scenes can get awkward because people feel forced to do things they don’t want to do, but the beauty of improv is that you get to make shit up. You don’t have to rub yourself against your scene partner. Maybe sex in this world is rubbing elbows like in Rocky Horror Picture Show.
There's also a hypersensitivity right now, which is not unwarranted. People have real reasons for fearing abuse in our culture and society, but sometimes we jump to conclusions during teachable moments, or turn people into villains without considering how to reintegrate offenders. I'm talking about the world at large here, but it all applies. The tricky thing is I'm on both sides. I want people to feel protected, but I also LOVE to flirt and exchange that dynamic energy with people. It's the most fun, but it's also gotten me into situations that I haven't wanted to be in. For me, this journey has been about no longer blaming myself for situations I couldn't control, but simultaneously taking responsibility and, in turn, reclaiming my own power.
And this journey is constant, right? I think we just need to be able to make mistakes as long as we're not hurting anyone. I think we need to be honest with each other. Ask questions. Choose curiosity over judgement. All easier said and done, especially when it comes to sex since we all have hitched a lot of baggage to that wagon. (And if you're reading this and thinking, "I don't have any baggage around sex," I bet you have extra baggage that you don't even see.)

If you had to choose between sex and magic for the rest of your life, what would you choose?

Impossible. Sex is magic. Magic is sex. If I can have sex, I’m making magic. If I can practice magic, there’s alchemical and sexual energy in motion. It's all life force. It's all the sparks that connect us and keep us reaching for one another. It's what we write and draw and create for. It is what we are.

Make sure you don't miss Sex Magic :: A Taboo Busting, Sex Positive, Magic Making Event this Sunday, 1/7, at 6 pm. Your pelvic floor will thank you!