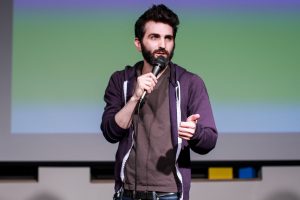 Junior Varsity's Jarret Berenstein is releasing his first book, The Kellyanne Conway Technique: Perfecting the Ancient Art of Delivering Half-Truths, Fake News, and Obfuscation-- With A Smile, this August from Racehorse Publishing. He's celebrating its launch with a show at Magnet and some of his favorite stand-up comedians. We sat down with Jarret to talk about his Kellyanne, his book, and the upcoming release show August 7th.

MAGNET: What about Kellyanne Conway did you find particularly interesting while you were writing this book?

JB: Before writing this book I assumed that people needed at least some integrity to survive. I thought it was like food or oxygen, and that a person with zero integrity would shrivel up and dry out like a desert grape. Kellyanne appears to be living sans integrity though, and that's pretty interesting. And worrisome!

M: Which part of the process in making this book was the most fun?
JB: Definitely writing the "everyday life" examples. In the book, I talk about how we can use Kellyanne's brand of spin get out of tight spots in our everyday life, so coming up with those types of problems (speeding ticket, late for work, double murder, etc) and then translating a Kellyanne move to fit that situation was really fun.

M: Why do you think a book, in particular, is a great medium for this kind of humor?
JB: I've seen a lot of articles and videos online about what Kellyanne does and why it's effective, but they mostly just scratch the surface. You need to have the full length of a book to go through all the different types of Conway nonsense and also have the space to thoroughly make fun of each of them.

M: If you had to boil down the essence of Kellyanne and her technique down to 3 words, what would they be?
JB: Overflowing with bullshit.

M: Tell us a little about your book release show!
JB: The show is on Monday, August 7th at 7:30 pm at the Magnet. It's gonna feature some great standups like Seaton Smith (from Fox's Mulaney) and Liza Treyger (incredible comic with one of the best Comedy Central Half Hour specials I've ever seen), and possibly a short reading from the book! There's talk of the publisher bringing free beer and a copy of the book for people in the audience (while supplies last) but don't hold me to that. 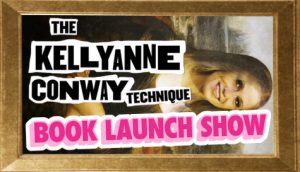