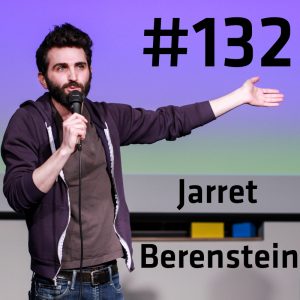 Magnet performer, stand-up comedian, and author Jarret Berenstein joins host Louis Kornfeld in the most recent edition of the Magnet Theater Podcast. The conversation hits a lot on politics and how Jarret feels he sounds like a tin hat conspiracy theorist when discussing them. Check out this podcast to learn about Jarrets upcoming book about Kellyanne Conway, his early days as a stand up comic, and how he still plans on living in a mansion with Gwyneth Paltrow.

Jarret and Louis start out the podcast with a discussion on acting in sketches and the pros and cons of memorizing lines. Louis admits that memorizing lines in a whisper never works for when he actually needs to perform them out loud. Jarrett describes the mastery of learning all of your lines as its own kind of fun.

After the brief pre-podcast conversation, we learn that Jarret has a book coming out, "The Kellyanne Conway Technique: Perfecting the Ancient Art of Delivering Half-Truths, Fake News, and Obfuscation?With a Smile." He was hired by the publishing company to make fun of Kellyanne Conway because knew someone at the publishing company who figured hed have time to do write the book. (Also, because he's funny. Duh.) He discusses his frustration with watching her lies and getting even more frustrated with the fact that her candidate won.

They start to talk about revenge against comedians  how unfunny people like Mike Huckabee and Kellyanne Conway are now trying to be comedic themselves. Jarret explains that he was unable to watch Kellyanne Conways stand-up comedy tape because he knew it would anger him too much. They discuss how the people who are considered funniest tend to be more liberal and how when conservatives make jokes they gain support not because people think they are funny but because people agree with them.

Louis thinks that Jarrett is very well-tempered when it comes to politics. We learn that Jarret spent all of November on Reddit and spent much of that time fighting with other users who he figures were Russians acting like Americans who support Trump, and how he realized it was such a waste of time. Though he was extremely angry, he realized that rage is not going to change anyones mind.

Jarret talks about his stand-up comedy and how he wants to start putting political humor into his act but he knows that when he starts talking about politics he sounds like a tin hat conspiracy theorist. He describes his faces in improv vs his faces in stand up. While he improvises, Jarret notices that he will break often and have a hard time not smiling because hes having fun. While in stand-up, he explains, his face is more Im looking at you in a serious way even though what I said was ridiculous.

Louis asks Jarret if he feels confident as a performer with ten years of stand-up comedy experience. Jarret thinks that he is and tells Louis about how comedians can grow as performers. Jarret reflects on starting out as a stand-up comedian at bringer shows and how embarrassing they are as a comic.

Despite his current focus on stand-up, Jarrets first love was improv. He talks about SNL, Comedy Central, listening to comedy albums  about not even knowing what the jokes were about but liking the rhythm of stand-up. He remembers playing MASH with his friends where he ended up living in a mansion with Gwyneth Paltrow as a paid improviser. That would be the life.

To close out the podcast, Louis discusses Kliph Nesteroffs book "The Comedians" and how it does a great job going through the history of comedy. Jarret and Louis agree that relevance is an interesting aspect of comedy  Jarret thinks that its weird that generations can grow up not seeing the best version of somebody.

Pick up Jarret's book, "The Kellyanne Conway Technique" when it's released in August and come to his book launch show at Magnet on Monday, 8/7, at 7:30 pm!