Getting To Know: Camber Carpenter 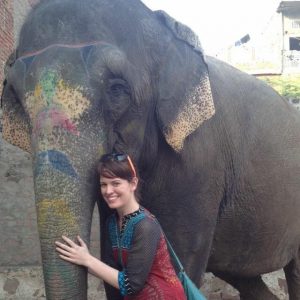 When I was in college (on a "foreign exchange" to NYC from South Dakota State) I found out about the free show ASSSSCAT at UCB and went almost every week...so when I actually moved to NYC as an adult, I wanted to try it out myself!

I know it's not possible because she is dead, but Lucille Ball. I think she's so wonderful and silly but also a smart and hard working.

In 2008, I liked to impersonate Sarah Palin, but Tina Fey really had it covered. Now--maybe this is sad--I like to impersonate my cat. I give him a ridiculous French accent and make him say pretentious things.

Sometimes my teammates make me laugh so hard from the sidelines that I forget I'm in the show and need to do something in the next scene. Also, I used to teach in Hong Kong and kids there would give themselves an English name at around age 10. So I had kids named Pinky Pinky, Money, Uncle, and...My Little Pony.

Started with '80s musical theater, morphed into DMB in college, then got so gritty in later college with lots of 90s rap, now it's more like an unrecognizable classical melody.

I always ask where people are from...I feel like most people who live in NYC are not from here. Plus I love to travel, so if I know where someone is from, I can perhaps later use them for travel tips or a place to stay.

Either working as a tour guide for big student groups, going to a show, or, if it's after 11pm, home in Harlem with my cat and fiancé, watching VEEP.

Who is an actor/actress (outside of the comedy genre) that you would like to see in a comedic film or play?