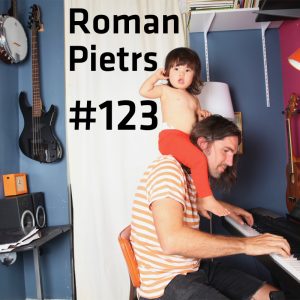 International man of mystery, ROMAN PIETRS, sits down with host Louis Kornfeld to discuss his improv life, his various profession(s), and being a dad who does improv. The Warm Blooded team member explains his proclivity toward using emotion during improv and Louis unearths out some of the reasons why Roman is a person of great intrigue. The topics in this episode range from European walking tours to male-perm quiche parties, so you know itll be great.

We begin this episode with a sneaky little cold open in which Roman and Louis delve into their family histories including a generation that seemed to largely reject their given names.

Diving into the episode proper, Roman divulges that he planned ahead by checking emails in order to refresh his Magnet Theater memory. When discussing musical improv, Roman explains that he has more of a musical mind than a lyrical mind and gives an example of a song about a box. Its the kind of improv that Roman refers to as, speaking in tongues. Louis also shares his perspective of letting yourself go onstage and opening your mouth without an idea.

The two chat about their experiences with emotion on stage and we find out that Romans safe place is going to a highly-inflated emotional state. Louis was uncomfortable with the idea of playing with emotion at first, but now he believes that emotion is everything. Roman discusses his recent struggle with breaking on stage - due to the hilarity of his teammates - and describes his team, Warm Blooded, as an ensemble that creates passionate musicals that borderline on the obscure.

Louis begins to figure out some of the reasons why Roman has the reputation of being a man of mystery." In addition to working in improv and graphic design, Roman also helps run a European walking tour industry (taking place in Budapest, Prague, etc.). After helping his wife out with a craft idea, they eventually got to be on Shark Tank. Male-perm quiche party is a term that Louis had never heard of, however Roman used it as a way to raise money for a good cause and in turn share a cover story with Slash from Guns N Roses. Lastly, we hear about an interesting taxi driver whom Roman learned a lot about. And thats just the stuff we had time for in this podcast recording!