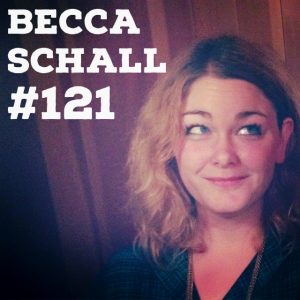 Queen of dinosaurs, BECCA SCHALL, joins host Louis Kornfeld to discuss her 10-minute play "Goofus & Gallant," how she has grown alongside the Magnet's sketch program, and duh, makeover shows! We find out from where Becca draws inspiration and what her sketch writing process looks like. Her team, Dinosaur Jones, moves to Friday nights starting April 21st but you can find out all about her right now!

Our episode begins with Louis asking Becca about her contribution to Magnet Theater's 10-Minute Play Festival, "Goofus & Gallant." They get into the differences between writing sketch and writing something a bit longer and Becca shares her fascination with the "Highlights" characters the play is based upon. Listen also to find out who Becca Schall was before she came to Magnet Sketch Teams and what the struggling life of an actor can be like!

Since finding sketch comedy at Magnet, Becca has grown a great deal and we find out how exactly she has changed since shes been in the program. She and Louis talk about honing your voice and learning what your sensibilities are, Louis asks about the kinds of things she finds herself writing these days, and they both discuss the legendarily bad movie "The Room." Becca tells of being inspired by everyday daydreams, growing a sketch from a small nugget, and how she works from an analytical process. Our two heroes both agree that makeover shows are sad and weird and Louis shares with us an excellent episode of Hoarders. Outside of comedy, Becca can often be found nannying and, as such, Louis asks her to dish on what kids are into these days. Finally, Becca shares with us where her comedy compass is pointing and where she hopes to go.

Don't forget to check out Becca's team, Dinosaur Jones, performing each Friday at 7pm from now until the end of June with a new show each month!!