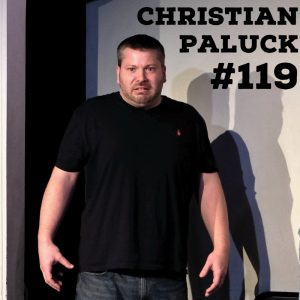 Perennial Magnet all-star, CHRISTIAN PALUCK, stops by to talk about his journey in comedy, being a more open person, and why he recently started drawing. From Emerson, to LA, to NYC, Christian brings a crapload of experience to the stage and insight to this episode. He and Louis dig into some great topics and, honestly, you're gonna friggin' love it. Huzzah!

After butchering the pronunciation of Christians last name, Louis wonders why we often freeze up when on the mic we are able to perform live in front of hundreds of people effortlessly. They explore this common occurrence and Christian explains why he doesnt like anything that focuses on expectations. Louis asks Christian what he was doing before he got into improv and Christian tells of going to Emerson College for television production and then ending up in LA. He was introduced to formal improv by his college friend Anthony Atamanuik and eventually moved to NYC to take classes at Gotham City Improv and UCB. He tells of being challenged by a particular UCB class and then pausing from improv to go into stand-up. Eventually, he came back to improv after finding Armando Diazs "Instant Brilliance" class and he's been at Magnet ever since.

Going from one journey to another, Louis asks Christian about being a father. How has having a kid changed how Christian manages embarrassment? He talks about quitting his day job to pursue acting full-time when he had a kid so that he could show his son that you have to follow your gut and fight for what you love. I mean, holy crap, right? This is great podcasting. Louis and Christian explore the overwhelming feeling that bubbles up when you cant solve a major life problem and Christian talks about being a more open person and how improv can help you tap into that.

When coaching improv, Christian likes to focus on the balance between an improviser's desire to act on instinct versus being polite, all while not being a jerk to your teammates. Our two heroes talk about how improv attracts a lot of smart people who maybe procrastinate too much and Christian wonders, "Why do billionaires worry about traffic?" They also discuss how Christian is perceived as a quiet, perhaps intimidating guy, though we all know he's a big softy. Speaking of! Louis asks Christian about the drawings that hes been working on! To round out the episode they ask the hard-hitting questions: Whats actually important to me? What do I really think is messed up? And, am I brave enough to be judged for it? Good stuff, gents.