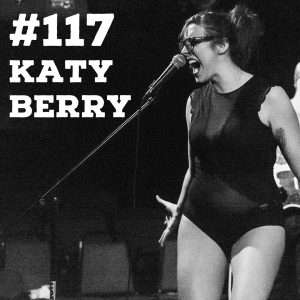 Comedian and rapper, KATY BERRY, talks with host Louis Kornfeld about performing with a chip on her shoulder, why Sexy Baby is so damn hot, and her hip-hop improv team, North Coast. They also discuss how their personal lives show up on stage, how Katy found herself doing comedy in NYC, and the importance of being a motherflippin' role model. For anyone who hesitates to be themselves and tell the haters to go screw, this episode was made just for you, with love, from KBizzle herself. Do. Your. Thang.

When we asked Katy what she might want to discuss on the show, she said, "Saying 'eff the haters' and slaying all day, every day" which proved to be a wonderful jumping-off point for the episode. We find out what exactly that means to Katy as she and Louis talk about putting the personal and private lives on stage for all to see. Katy feels as though she has something to prove as a performer and that it comes from her childhood, both parts of which we get into. A shock to no one who has seen both of them perform, Louis theorizes that he and Katy may deal with private matters in opposite ways! For Katy, it all ties into her resolve to never back down from being herself.

Katy considers herself very lucky to have been on three incredibly supportive, incredible teams who have all celebrated her approach to improv and allowed her voice to be heard, loudly. She shouts out Cool Blanche before getting into her current teams, Sexy Baby and North Coast. Louis asks Katy about Sexy Baby's modus operandi and she boldly claims that fart jokes are the birth mother of all comedy. Katy tells us what Sexy Baby tends to focus on in practice and she provides us with a little bit of her own NYC-comedy origin story.

Of course, we can't hear from Katy Berry and not discuss North Coast, her hip-hop improv team that is about to celebrate their eighth anniversary (this coming Friday)! Katy got onto the team after going to an open audition and tells us why it was not only a match made in Heaven, but maybe even fate. She talks about what goes through her head when doing scenes with North Coast and how the confidence gained doing hip-hop improv slips into her daily life. Katy and Louis both think that people who have never struggled have very little to offer us on stage and Louis has an epiphany on the mic! As a performer, Katy urges everyone to play fearlessly, to lead, and to be a role model when on stage. By simply being yourself, you allow others to be themselves too. Finally, Louis brings to light a very interesting point that we should all be keyed into and we end this episode with some excellent plugs. Want more on Katy? www.katyberrycomedy.com