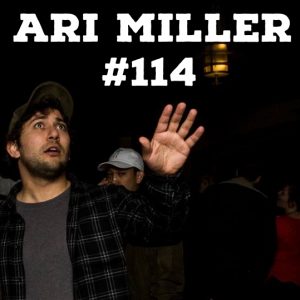 Executives bad boy and newly-minted Director of Magnet Sketch Teams, ARI MILLER, joins us to talk all about the sketch program and to share mad wisdom (tight). This episode is chock full of great advice for sketch newbies and veterans alike, as well as Ari's insight on what makes a team great. Get to know your new Director of Magnet Sketch Teams right here, right now!

Ari and Louis begin the episode talking about Ari's sketch team, The Executives, their big move to the weekend, and writing theme shows. Beyond Ari's own team, they start talking about the program as a whole and Ari lays out his ideas for building the program to even greater heights. They discuss how going through the program as an individual is a poor plan and Ari advises on how to be a good teammate while making it worth your while personally. Louis then asks Ari to break down the expectations of different writers and performers and to give them guidance for these varied experience levels.

Hear Ari's advice on submitting packets, which center around clarity and boldness. Learn how to deftly hit pattern and game over and over again. Louis answers the question, "Why was Phil Hartman so incredible?" Ari also provides advice on balancing when to follow your own ideas versus taking in other peoples opinions. Want some team advice? Respect each idea and respect each other in the space. Be polite, folks! For people who have been working on sketch comedy for years now, Ari offers up suggestions and standards that will help you achieve the next level. To wrap up their sketch comedy discussion, Louis asks Arti what imprint he hopes to make on the program and Ari answers. He's a polite guest.

Finally, they wrap up the episode by shouting out the March edition of Character Bash which will feature many of Magnet's great teachers and raise money for East Side House Settlement.