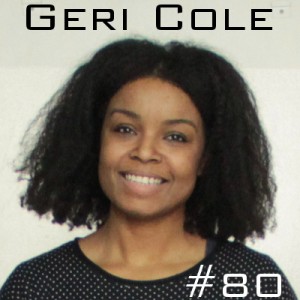 The Cast member and hilarious human, GERI COLE, joins the show to talk about travel, her utopian hometown, and how to bring more voices to the comedy table. Geri spends her weekdays working on Sesame Street and her weekends creating one-of-a-kind improv shows with The Cast, so we're thrilled that she's taken some time to talk to us about true wealth, her time in Barcelona, and what she loves about her sweet, sweet hubby! Listen in, kiddos.

We gave it away in the intro, but the first thing Geri and Louis discuss on this episode is travel _ specifically about how Geri loves to do it despite the fact that it gives her terrible anxiety. Louis cant pick up and go nearly as easily as Geri can, so asks about the psychology behind having a travel bug. One thing that helps Geri overcome her anxiety and see new places is her love of observing people. She talks about being very generous with her attention and the act of people watching. She then tells of her moving to Barcelona for a year and how her naive by nature personality led her to NYC.

Enough about all the cool places Geri has lived, let's talk about where she's from! Geri grew up in Columbia, Maryland, which is a planned community designed to be a utopian town prioritizing racial and economic integration. No joke! Hear her talk about this fascinating and truly inspiring place. This leads into an exploration of the idea of true wealth and what makes a person truly rich. Geri makes up some statistics and, spoiler alert, money isn't the (only) answer! Louis also asks, can you be "good" at having money? Fascinating!!!

These days, Geri works at Sesame Street (along with a number of other Magnet students and performer) and it's been her street away from home for seven years now! That fun fact aside, Louis transitions to what he deems the heavy and controversial part of our podcast. He wants to know how we can bring more voices to the comedy table. He also asks, how are we contributing to good in the world and not just adding more crap? Geri attempts to answer these absolutely massive questions from Louis and provides us with some insight into how we might do it. They wonder, is there any real science behind what theyre saying? If youre a scientist, let us know!

Then, out of nowhere, Louis pivots to talk about The Cast! Geri claims the show is so good because theyre having a friggin' blast up there. Color us convinced! Louis tells Geri what his students say about the show and she admits that what she loves most is how they fearlessly cram for shows.

Lastly, and certainly not leastly, Louis makes Geri list three things she loves about her husband, Andy Mills. Tune in!