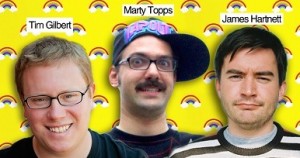 Ever thought about taking the show on the road? So have these guys! Monday, September 8th at 8:30pm, three Toronto performers, James Hartnett, Tim Gilbert, and Marty Topps, are taking the Magnet stage to bring you their best work as a part of their New York and Philadelphia tour. I (Amanda Ariel Peggy Xeller!) got the awesome opportunity to not only see Marty Topps (Isaac Winter!) perform in Montreal, but got to conduct an e-mail interview with him for the Magnet's blog.

Marty Topps is an award winning musical comedian from Toronto who burst onto the scene with his debut album, "A Loving Tribute to TapouT." The album was ranked the #2 Comedy Music album of 2013 by BiteTV. Marty followed this up with a musical short film, "Beep Beep" which won First Place in the Laugh Sabbath Film Fest at NXNE 2014. Marty's live performances have led to accolades like Best Newcomer at the 2014 Montreal Sketchfest and Audience Award (Best Musical Sketch) at the 2013 Toronto Sketch Comedy Festival.

Where are you from originally?...and what's that place like?!

I'm originally from Stratford, Ontario. Stratford is a nice town. It was pretty wild growing up in the shadow of the undisputed King of Pop, Justin Beaver but I also found it really inspiring because it made me #believe I could grow up to be a song-and-dance-man just like him.

How did you originally get into comedy?

I started by messing around at the open mic at York University, trying different things. Weird, silly performances. There were no other comedians. It was all poets, folk singers and experimental musicians. No one was really into what I was doing so after I dropped out I started putting on my own shows which were kind of like comedy raves. My co-host was a robot speaking DJ and we had choreographed back-up dancers, circus performers, internet celebrities, crazy bands and comedians. We did it for about 5 years and I hung it up last year to focus on writing songs about TapouT.

Who is Marty Topps and who is Isaac Winter?

I'm Marty! Isaac Winter is a pen name I use because I plagiarize most of my material and I don't want to get sued.

Tell me about the other 2 goofballs (James Hartnett and Tim Gilbert) you are playing with/sharing stage time with.

Tim and James are two of my favourite comedians in Toronto. I met both of them through being a huge fan of Laugh Sabbath, a comedy collective here that puts on some of the best weekly shows in the city. Theyre both producers and hosts there.

Tim is one of the best stand-ups Ive ever seen. He just recorded his first comedy album which should be out soon. Ive heard an early version of it and its going to be amazing! Tim is one of those guys who isnt afraid of bringing the audience to a tense or uncomfortable place because his payoffs are always so brilliant and rewarding. Hes also a great tattoo artist. Here are some of his designs: http://tattoosbytim.tumblr.com/ (@gilberttim on Twitter)

And James somehow manages to weave his stand-up into these incredibly crafted bits that just make my jaw drop while crying from laughing. I dont want to spoil any of his material, but I will say this if you hear him start talking about Gotye, buckle up!

Heres a short that he wrote and starred in directed by Nathan Fielder: https://www.youtube.com/watch?v=zRjMrct2ZOc (@jameshartnett on Twitter)

What makes this show oh so very special?

Its a rare show where not only do you get to see TWO amazing stand-ups AND a guy who sings, dances and plays keytar, but its also a show where you can just come and be yourself and experience Canadas nice, non-threatening nature at its finest.

How long have you been touring? What have you learned from being on the road?

This is my first tour. Montreal was the first time I've played outside of Toronto so hopefully this goes okay!

Any advice you want to pass along?

Dont write an album and develop a live act around a copyrighted product.

Were you listening to music or a playlist or anything while filling this out? Oh please do share!

Well, I've been working on my new album this whole time with my collaborator, Adam Kemp. It won't be out for a while but you can get my last one here: http://www.martytopps.bandcamp.com

Be sure to catch Marty, Tim, and James when they are in town on Monday, September 8th at 8:30! For reservations click here.