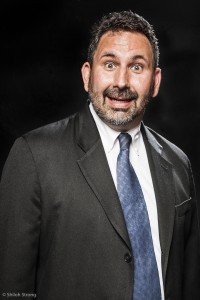 I'm very happy to share this recording from the archive of Craig Cackowski interviewed live onstage at Magnet Theater by the well-prepared Louis Kornfeld. Craig and I were in class together with Del Close, on our first IO teams together, and when I was promoted from understudy, Second City placed me in his touring company.  We did a lot of scenes from the Razowsky/Colbert/Carell and McKay/Adsit eras.  He was great to tour with because he's both reliable onstage in scenes and touring the country for long stretches in a van.  Usually people are one or the other, but he was both. Onstage he's casual but precise, and he's got great timing both as an audience-pleasing comedian (in the good way) and as an improv partner.  He rescues things, and if it can't be rescued, he'll go down with the ship.  And it seems like he's really enjoying himself either way. And since I'm on a roll here, I should mention he's become one of the best, most sought after improv instructors in Los Angeles.  Possibly because he's committed to the things we learned in those classes with Del.  But also because he's sensitive to the advancements that have been made as long-form has evolved from an obscure experiment in the basement of an anonymous Chicago apartment building 24 years ago to the dominant comedy language spoken across America and beyond.  And that's thanks in no small part to Craig. So listen to this episode and see if you can hear what I hear - a genuinely good guy who cares about what he does, does it well, and has no need for false bluster.  Enjoy. -- Ed Herbstman PS: Craig is okay.  But his little sister is like, 12 times funnier than him and at least twice as funny as me.  Hi, Craig. Subscribe to the Magnet Theater Podcast via iTunes here. Enjoy Episode #11 on iTunes or below via SoundCloud. [soundcloud url="https://api.soundcloud.com/tracks/158768947" params="color=ff5500&auto_play=false&show_artwork=true&show_playcount=true&show_comments=true" width="100%" height="81" iframe="false" /]