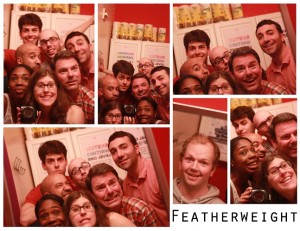 "It's amazing we're even improvising at all.
So many people wouldn't be able to be doing what we're doing.
That in itself is exciting. Embrace that bravery."

The above is an improv mantra held dear by Elana Fishbein, one of the original members of Magnet House Team Featherweight. Hopefully you have seen one of their shows. If not, block off an hour on Wednesday and catch this notable Megawatt team.

On November 13th, 2013 I had the distinct pleasure of sitting down with 6 of the 8 current members to pick their brains about the team, themselves, and how they play together. For all of you who don't know, Featherweight is the most veteran Megawatt team at the Magnet. They were formed on late August 28th, 2008 by Peter McNerney, who also served as their first coach for almost a full year (they are now coached by Joe Miles). Their original line-up was Jesse Acini (now on All American), Russ Armstrong (now on Chet Watkins), Noel Dinneen, Elana Fishbein, Jess Lane (now out in Los Angeles), Blake Merriman, Jared McGrail (traveling the country doing a webcast), and Justin Moran. Their first form was The Harold and their name came from a scene that happened at their very first practice: Elana Fishbein had brushed her hand against Jess Lane's breasts to which Elana exclaimed, "Oh! They're featherlight!" From Featherlight came Featherweight, also pitched by Elana. Since then, Featherweight has gone on to be one of the most celebrated teams of the Magnet - playing for over 5 years on Wednesday nights, traveling to do the Philly and Boston Improv Festivals, performing at colleges, launching 2 pilots, and competing and losing in the very first Inspirado competition (their challenge, titled Farts! Farts! Farts!, required every scene to have a fart).

Like every veteran Magnet team, Featherweight since its inception has undergone changes. The line-up that you will see today is almost a totally different set of faces you would have seen a few years ago, or even a couple of years ago. Only 4 of the original members remain. After Russ left, Dave Maulbeck was added and also served as the team's coach. Featherweight then experienced four more losses including Dave. Willy Appelman was added in late August of 2012, but left shortly after. In April, they welcomed veteran players Frank Bonomo, Matt Shafeek, and Lauren Ashley Smith. Matt and Frank were cast alongside each other on Megawatt team Skosh a few years ago. The two also played with Noel on Oswald prior to Featherweight's original casting. In addition, Matt and Elana had played together on Flea Flurkus, a 2007 team that performed the Evente. The most recent addition was that of Will Quinn this past August, who had been coached by both Elana and Frank. Collectively, Featherweight has over 50 years of improv experience loaded onto its current roster. Despite the new look and massive transformation (this is the first time in many years that Featherweight is an 8-person troupe), the feel and quality of the team remains the same as it has always been: "The Featherweight I watched is the same team I'm on now. It's the same energy." -Lauren Ashley Smith. It's a testament not only to the casting of the team, but the openness, support, and skill these players bring to the stage of why things have always worked out.

Featherweight, who warms up by hitting a ball up in the air with great effort to not let it hit the ground, improvises a free form, meaning they find the form as they go. "It comes off having a feel of a little town where the characters know each other and other characters branch out of that." - Will Quinn. Something Featherweight prides themselves on is having a great range with their shows. The spectrum they cover not only in their 25 minute set, but week to week, rivals most sets at the theater. When I asked Noel Dinneen what the most important quality an improviser should possess is, he responded: "The will to improvise, meaning the willingness to actually improvise as opposed to be married to a structure or game." Some shows might end up being slow mono-scenes and the next week everything blows up. Regardless of what their set calls for, each week Featherweight brings their flexibility, vulnerability, generosity of spirit, and "imperviousness to fear of judgment" (Justin Moran) to create their fun and their funny.

Frank Bonomo has a strong gift at bringing the humanity to Featherweight's shows. He lets characters be affected; he knows how each character he plays will react emotionally and is still so versatile in his play. He considers the small human moments.. Also, his object work is insane.

Noel Dinneen came to The Magnet to study with Armando. He considers his most influential instructors to be Mick Napier and Del Close. His team celebrates his fearlessness, range, and how he brings zero hesitation to his work. There is nothing Noel can't yes and. He's also got a pretty killer attitude.

Elana Fishbein came to The Magnet to study with Armando. She considers her most influential instructor to also be Armando Diaz. With a Featherweight set comes Elana's ability to play a spectacular and  effortless range of strong, intricate, fully-formed characters. She is so specific and grounds the work. Featherweight feels that when Elana is playing, the show is in good hands.

Justin Moran came to The Magnet to study with Armando. He considers his most influential instructor James Eason. His team refers to him as an "information robot" who not only brings incredibly smart scene ideas, perfect lines, and smart appropriate punchlines to his work, but amazing characters you could never imagine be a part of the scene but work every single time.

Will Quinn came to The Magnet because of the opportunities the theater would provide. He considers his most influential instructor to be Peter McNerney. Will has a great understanding of game and heightening as well as adding finesse to Featherweight's sets. When Will plays, his joy as a player shines through. He brings to his characters a level of polish making things very clear and very full.

Matt Shafeek came to The Magnet to study with Armando. He considers his most influential instructor to be Michael Delaney. Featherweight describes Matt as a mature, confident, and joyful player. He's always thoughtful and takes his time when making choices as opposed to exercising "quick lazy play." He provides context and knows what a piece needs to create a successful scene.

Lauren Ashley Smith came to The Magnet because of its welcoming atmosphere, energy, and people. She considers her most influential instructor to be Armando Diaz. Her team pegged her as "a sniper" because of her sharp sense of humour, specific moves, and ability to bring to a scene exactly what is needed. Her mind is constantly exercising on how to heighten, instill more life, and bring things together.