Youre not alone.  And now you, along with millions upon millions of people, just might fall in love with A&Es new show, 'Think Tank. Or not. Because it's not like those other shows at all.

We sat down in the Magnet Theater lobby with one of the show's actors, Ed Herbstman (The Mantzoukas Brothers), to get an inside scoop.  It was a lively and wide-ranging conversation, and we hope you enjoy it.

Full Disclosure, Ed is one of the co-owners of Magnet Theater, and therefore we were very conscious of the appearance of a journalistic conflict of interest.  In light of this possibility, we made every attempt to be even-handed and unbiased.

Magnet Theater: So. This show.  What is it?

Ed Herbstman: Why do you ask that way?  Are you mad at me?

EH: Wow.  Do you hate me or something?  Youre really hostile.  Is this part of the interview?

MT: You calling me a liar?!

EH: Your phone just fell off the desk because youre pounding it so hard.

EH: HEY!  Stop it.  You want to know about Think Tank or what?

EH: Okay. Umm, I play Patrick Severe, a member of the Woodbine Foundation think tank that is a bit arrogant about his brilliance, and uses it as a shield when it comes to relationships with woman.  I like to think of him a one part Alex P. Keaton from Family Ties and one part me. 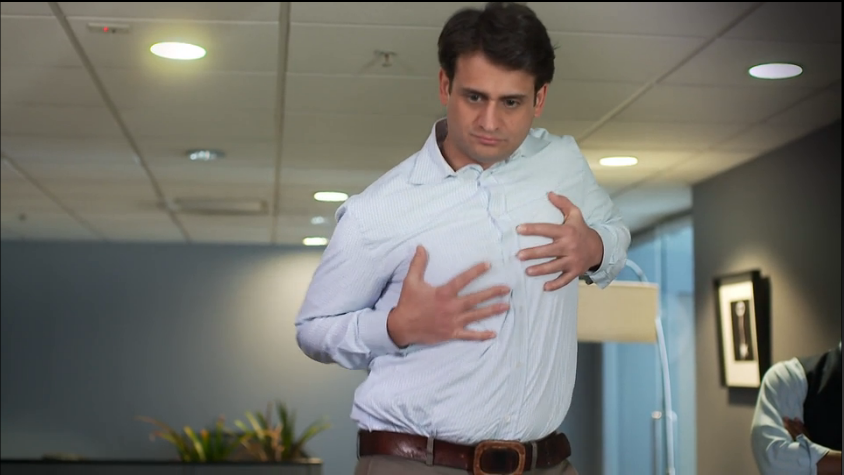 EH: Ummm and the show is A&Es first scripted comedy, and its first web series.  But there is some talk of it making the jump to TV.

MT: Really?  Or are you just saying that to start a rumor and hope it becomes true?

EH: Okay, enough.  This is crazy.  No Im not just saying that.  I was told there is talk.  I dont know what that really means or what.  Im just repeating what I heard.

EH: Is this a joke?  Are you pranking me?

MT: How much of the show is improvised, Mr. Improv Guy?

EH: Okay, thats a good question but you ruined it by insulting me at the end of it.

MT: So calling you an improv guy is an insult?  So improv is stupid and all improvisers are dumb?  Wow, that is a big insult to a lot of people, Ed Herbstman!

EH: Thats not at all what I said.

EH: Yes.  Yes.  Youre a liar.  Youre a horrible interviewer and I feel like youve wasted my time.

EH: Youre not seriously crying, are you?

MT: Umm, so Ed, (stifling tears) was there much improv involved?

EH: Jesus.  No.  None.  It was completely scripted except for the character background videos which were mostly improvised.

MT: (through tears, barely audible) Yeah, those were funny you were good...

EH: Umm, are you going to be okay?  Heres some tissues.

MT: Thanks. I promised myself I wouldnt do this.

EH: You mean be really angry and then super-sensitive and then sob?

EH: Stop punching yourself! Christ Jesus, you have to stop that!

MT: Okay.  Um, where can people catch your web series?

EH: Well, thanks for asking.  They can see all of the episodes online at aetv.com/think-tank. Or on the A & E app, or on Hulu.  I think its best enjoyed on the A&E site.  And please like it because if enough people do, then maybe well get to make more.  It was a really talented and fun cast and production team and Id love to play with them again.

MT: Okay, then.  Thanks for your time and good luck.

EH: Okay.  Do you need me to call you a car or something?

MT: Yeah, that would be nice.  Thanks.

Catch Think Tank on the web at aetv.com/think-tank.  If you found this interview useful, please share it.  And feel free to leave your comments below.