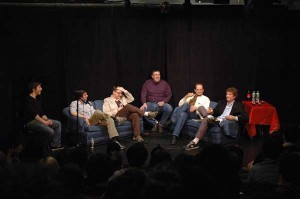 In a city of over 8 million strangers, it's incredible to find a place that feels like home.  Yet, in it's 7th year, the Magnet Theater continues to do that for many improvisers, actors and comedy addicts.  The Magnet's supportive atmosphere focuses on  following your gut and "yes and"-ing in a grounded and personal way.  There is no fast track, improv is like anything else, it takes time to master.  At the Magnet, there is no pressure to be anybody other than yourself.  Much of that comes from co-founder Armando Diaz, who dreamed that the Magnet would "facilitate people making comedy and meeting each other."  I sat down with Armando Diaz and inquired about this very important milestone:

Willy Appelman: What was the first show in the Magnet Theater space?

Armando Diaz: I was teaching an Evente class and we had our first show in the theater.  The stage wasn't finished.  It was an experiment for all of us.  We (Ed Herbstman and Alex Marino) started the theater together.  We knew each other, I had been teaching independent classes and putting on shows at a basement theater in the West Village.  We would hang out afterwards and one time we were walking to get a beer and we saw a space that had a "For Rent" sign on it.  We snuck in and thought, "Whoa... This is way too big."  But that forced us to start talking about making a theater.  It seemed like the next step.  So we started looking for spaces, and we settled on one with a stage that wasn't finished. 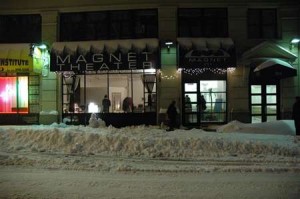 WA:  What have been some highlights over the years?

AD:  There's been a ton of highlights.  It's a lot of fun when you see people rehearsing, and people are in classes and the theater is packed.  I love the weekends.  There's all this buzz at the training center, people passing each other in the hall.  Students taking the free class.  You see new people and experienced people.  To me, the whole point of starting this thing was so that it would be a creative entity and would facilitate people making comedy and meeting each other.  What's better than that?  That wasn't really a highlight, was it... Our first Musical Improv Festival.  There.  And we always have great parties.

WA:  Thank you.  Where do you see the theater in 7 years?

AD:  I hope that it continues to grow and we're able to tackle other forms; more written shows, webisodes, it would be great to produce a sketch revue.  Just following the natural evolution of the current path.  The classes and the shows are constantly feeding each other.  We start trying something out, and then it becomes  a show and then we teach that form.  Or we have a class that turns into a show.  It all comes from our community.   It's always been important to me that the way we approach each interaction is trying to "yes and" who people are.  What makes improv funny is who the person is and what they bring to it.  It is so much more powerful to seek out and really encourage someone to be the best version of themself as they can, and not force them into being anything other than that.  I like meeting people, that's what's interesting in having a theater.  It's great to see all these different types of people succeed as opposed to opening the door to only one type of person.

WA:  Any advice to improvisors? 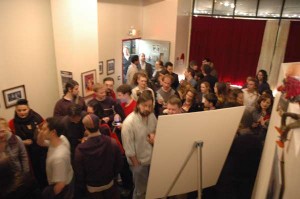 The Magnet celebrates it's 7 year anniversary this Friday the 13th with the first ever Magnet Awards show, "The Maggies".

Are you a Magnet Performer, Employee, Teacher, Fan, Friend or FWB?  Leave a comment below and share your anniversary wishes with each other....