It's here! It's here! It's finally here! Giddy all day and full of glee like a kid who has spotted an array of presents under the tree left by Santa - this was the excitement I felt last Saturday for the first ever Ladies Night at The Magnet Theater! An evening dedicated to showcasing the improv and sketch comedy talents of women from around the city. 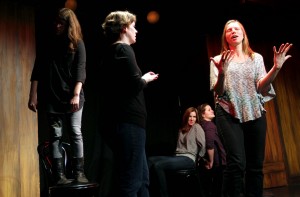 The energy from the performers and audience was palpable, the seats were sold out, and as one of the many performers who watched shows from the side, I was craning my neck to see everything I possibly could onstage.

Those who couldn't get a seat or view from the side, had their own jolly good time in the lobby drinking homemade wine spritzer and vegan cupcakes - baked by Megan Gray and sold to raise money for Gilda's Club, a cancer support community created after Gilda Radner, who is many women's comedic hero. 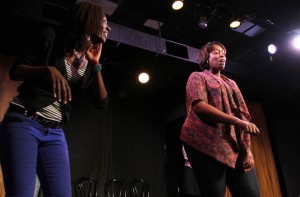 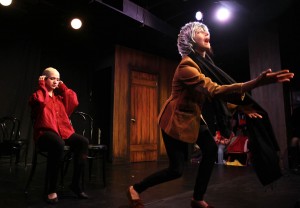 That night I watched female improvisers take the stage who normally dont have an opportunity to perform together. Out of these unlikely groupings, some of my favorite improv scenes happened. Seriously, if a version of AFI's Top 100 Improv Scenes existed, several of them would have to be knocked off the list to make room for the performances from last Saturday night! These ladies urged me to stand up, cheer, and clap thunderously alongside Maggie Morris and others. (Her clap rivals Binu Paulose's laughter on the decibel scale.) There was a perfect balance to the evening with some new lady improv groups, some lady groups that have been around the block, mix em ups with female improvisers who have never played together, sketch, a tease of burlesque and a lady mixer at the end allowing women who hadn't played at all that evening to play with people from the prior shows. 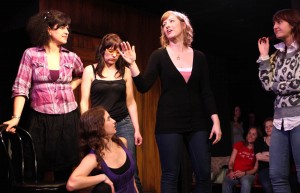 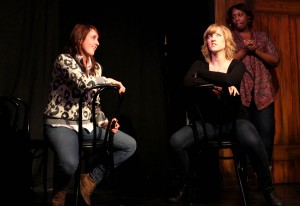 One of the greatest feelings in the world is laughter. Even better is when it's your friends making you laugh. Even better than that is when your onstage performing with friends and fellow improvisers and laughing so hard you forget that youre onstage and supposed to be performing!

The best thing about Ladies Night was not only seeing all the female talent out there, but also that it was filled with bold, hilarious, kickass improv...all of which happened to be from females. It wasn't just funny female comedy; it was a night of badass improv highlighted by the fact that it surged from a spring of female talent! 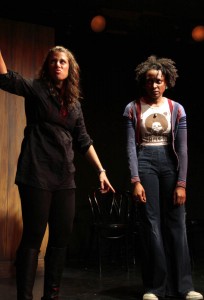 I'm just grateful I was one of the many who was asked to grace the stage that night, and honored to share the lineup with the likes of Megan Gray, Kelly Buttermore, Christina Gauses, and Shannon O' Neil (four women I have adored and watched for years as they continuously blow my mind with their no holds barred improv). I, and all the other women that evening, were truly delighted to play with such funny people...all who happened to be women. Yes, Chrismukahkwanza came early this year and hopefully it comes again more frequently in 2012! A sentiment felt by not just the ladies, but also by the fellas. Hubba, hubba.